When I was a PhD student I had to give some presentations. I think I tried once to use Powerpoint to give a presentation filled with mathematical equations before I decided that this was not going to work ;)

After some other packages, I finally found LaTeX-Beamer. For the majority of the presentations the default styles provided with LaTeX-Beamer were sufficient, but every now and then I wanted to have a bit more, do I dare to say it, powerpoint like theme :)

I wanted to have background image over which an white transparent layer would be put, on which the text would appear. I created a latex-beamer style for this and a sample output of this diepen style is given in the two pictures below: 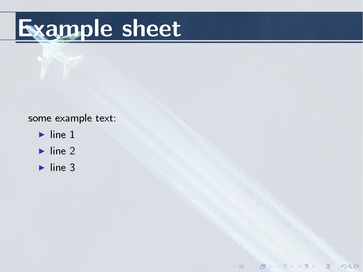 The picture that is on the background can be changed into any picture you choose, although I found that in most cases the result is the best when the used image is not too bright.

To use the style, you must first download the source from my GitHub repository, and copy it into the texmf directory (or your local texmf directory) and make sure that you have run the texhash command under linux or the windows equivalent such that pdflatex is able to find the style files.

After you have done this, you can use it by placing the following command in the preamble of your beamer file:

The following options are available:

If you have any questions about this diepen style, please let me know.

In some weeks we will get the key to our house we recently bought and I thought this was a perfect opportunity to buy a small light-power computer that I can use in the new house as a server. Currently I have my desktop

For the last couple of days an increasing number of people were mentioning that they had problems with synce in Ubuntu. After running synce-pls they received the following error: ** (process:6884): WARNING **: synce_info_from_hal: Failed to obtain property pda.pocketpc.iface_address